The Diffusion of "New Services" in India

Abstract:
In this paper, we study the globalization of the service economy in India, by looking specifically at the emergence of what could be described as ‘new service professions’ such as gym trainers and coffee ‘baristas’. While such professions may not necessarily be new in other parts of the world, they are characterized by a certain newness in India, related to their sudden arrival and subsequent rapid ascendency as new professional opportunities for Indian youth.
We draw upon ethnographic fieldwork conducted over the period of 2013-2015 which focused on the broader category of gym trainers (e.g. spot boys, floor instructors, personal trainers) and so-called coffee baristas (those working for large coffee chains such as Starbucks or India-owned Café Coffee Day).
Our research first illuminates how service interactions, however standardized and codified, are imbued with socio-cultural, historically situated understandings and ways of being, that often predate the idea of “service” as an industry and a profession. For instance, when we look at gym training, we find that the honor or izzat that service workers gain through employment in a profession associated with a specialist type of knowledge, is critical. By demonstrating and evoking this knowledge, gym trainers establish a type of master-disciple or guru-shishya relationship, which pre-dates the service economy as we understand it.
Second, across gym trainers and baristas, our work surfaces the crucial importance of English as an important cultural boundary or interface, in helping middle-class service workers access specific jobs, facilitating interactions with clients, and helping service workers build recognition among their peers. In detailing the role of English in the lives of young service workers, we add nuance to existing understandings of the Indian middle-class, and surface the role critical role of language in service interactions.
Overall, our work shows that the globalization of services only gives a new shape to existing frames of interaction. In addition, our work is consistent with recent research highlighting how the globalization of the Indian economy amplifies the role of English as a marker of competence and worth, and a driver of social mobility.
As part of our fieldwork, we produced a short documentary film on the life of a gym trainer, which we will show as part of this talk, to further reflect on the notion of respect in these new professions.

About the speaker:
Julien Cayla is a Research Fellow at the Institute on Asian Consumer Insight, Assistant Professor of Marketing at Nanyang Business School (Singapore) and Visiting Professor at Kedge Business School (France).
Professor Cayla received his PhD from the University of Colorado (Boulder, United States) where he majored in marketing and minored in cultural anthropology. His dissertation on the Indian advertising world received several national awards, including the MSI Alden Clayton Award and the Sheth Award. In his research, he tries to integrate anthropological theories and methodologies to the study of marketing in the global marketplace.
His work has been published in outlets such as the Journal of Consumer Research, the Journal of Marketing, Organization Studies and MIT Sloan Management Review. His edited book titled Inside Marketing was published in 2012 by Oxford University Press. In Organization Studies, James Fitchett called Inside Marketing “one of the most important collections on marketing published to date”.

Professor Cayla reported his research on gym trainers and coffee shop baristas in India. These are new services to this country. A lot of new jobs like these are created rapidly. Professor Cayla conducted ethnographic fieldwork in New Delhi and in-depth interviews with gym trainers, baristas and their customers. He showed a film that he made about a gym trainer.

Professor Cayla described the interesting social dynamics involved in these services. Gym trainers who are from low middle class, non-English speaking, serve customers in upper middle class, English speaking. The relationship is quite complicated. Initially, trainers are afraid of touching customers when they needed—a customer got injured as the trainer did not physically support her. It takes them some time to get used to the relationship with the customers.

Elite upper middle class customers call them by “Sir.” This was a big deal because such respect and recognition from the elite would have been inconceivable. Gym trainers are seen as gurus, giving knowledge to others. Nonetheless, this recognition is complicated because it is uncertain whether the same recognition would be given outside the gym.

Coffee shop baristas have different cultural issues. As employees, they are required to clean tables and pick up customers’ leftovers. In the Indian culture, such jobs were given to certain people. For the same reason, they do not want to be seen sweeping by broom. They are willing to sweep inside but not outside. Such resilience of local culture has been a challenge for services.

In the discussion, we debated how the concept of recognition can be used in service research. Particularly, struggle for recognition, as theorized by Hegel and advanced by Honneth, would be an interesting framework to understand services. In addition, we discussed how to use the video in ethnographic research. Professor Cayla’s film of a gym trainer was powerful conveying the reality. 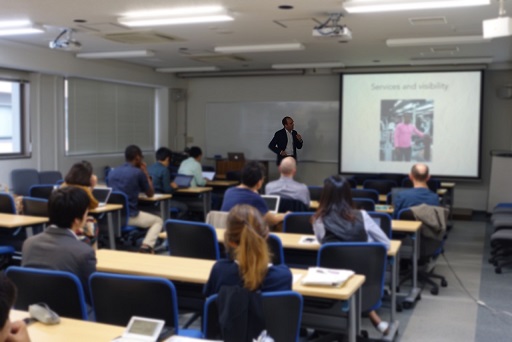